The Bahamas Elected Chair of the CTO

BRIDGETOWN, Barbados (15 September, 2016) – The Bahamas has been elected Chair of the Caribbean Tourism Organization (CTO).  Minister of Tourism for the Bahamas, Obie Wilchcombe, is the new CTO Chairman. 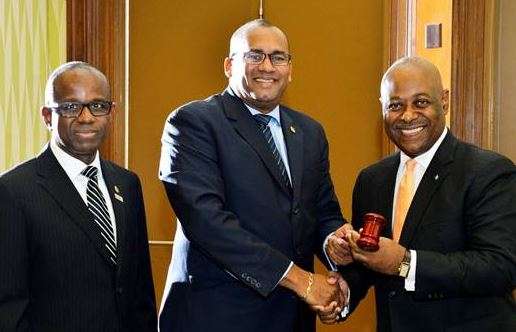 The election took place on September 15th in Barbados, at the organization’s annual general meeting held during the CTO’s State of the Tourism Industry Conference (SOTIC).

Following his election, Mr. Wilchcombe stated: “I intend to build upon what [immediate predecessor Richard Sealy of Barbados] began and I also intend to build on the relationship with the private sector. I’ve always thought that CTO is the body that provides equity and we can (do that); and the way is to speak with the same voice. We also have to deal with the issue of inter-regional travel.”

Minister Wilchcombe will serve a two-year term. It is his second stint as chairman, having previously been elected to the position in 2002.

The Bahamas minister will shortly name his appointee for the post of Chairman of the CTO Board of Directors, since, according to the CTO Constitution, the Board Chairman and the Chairman of the Council of Ministers and Commissioners of Tourism must come from the same Member Country. In addition to the election of the chairman, vice chairs were elected to serve on the Executive Committee of the Board of Directors to represent various sub-groups – Curacao, represents the Dutch Caribbean; Martinique represents the French Caribbean; Barbados and Belize, represent the Independent CARICOM countries and the Turks & Caicos Islands represents the British Overseas Territories.  Each of these Member Countries will form the Executive Committee of the Board of Directors, which will be completed with representatives from the private sector.

Today’s vote was in keeping with the CTO constitution which mandates that elections must be held every two years.

This year’s conference at the Hilton Barbados Resort is organized in collaboration with Barbados’ Ministry of Tourism and International Transport and the Barbados Tourism Marketing Inc and is sponsored by LIAT, the Caribbean Airline and Libris by Photoshelter.

Minister of Tourism and International Transport for Barbados and CTO Chairman Richard Sealy has a special message on SOTIC. To view the message, please click on the following link: http://bit.ly/2comjPC.

Regional Hospitality Assured Workshop gets under way in Barbados

The 5-9 September workshop is being organized by the Caribbean Tourism Organization (CTO) to sharpen participants’  business advisory skills so they can provide technical assistance to Caribbean tourism businesses  which will participate  in the Hospitality Assured Certification Programme.

Nineteen participants from 13 CTO member countries are attending the workshop, which is being held with funding support from the Caribbean Development Bank through its Caribbean Technological Consultancy Services (CTCS) Network and the European Union’s Competitiveness of Enterprises and small and medium-sized enterprises (COSME).

“We are proud of the partnerships we have formed over the years with regional and international organizations such as the Caribbean Development Bank and the Institute of Hospitality, which make it possible for the CTO to provide services such as this for our members and for the region,” Hugh Riley, CTO’s secretary general said.

“We are driven by our emphasis on human capital development, our responsibility to help reduce the region’s unemployment, and our laser-like focus on consistently improving the quality of the experience the Caribbean offers to its visitors. This workshop seems to me to be relevant to all of those aspects.”

The workshop, which will be facilitated by John Burchell of Hospitality Assured in the United Kingdom, with assistance from Norma Shorey Bryan, a trained Barbadian business advisor, precedes the region’s premier tourism gathering, the State of the Tourism Industry Conference (SOTIC), where those issues will be tackled. SOTIC takes place in Barbados from14-16 September.

Hospitality Assured is a certification programme promoting service and business excellence in tourism and hospitality companies.  It is owned by the Institute of Hospitality in the United Kingdom, and managed by the Caribbean Tourism Organization (CTO) in the region.