BRIDGETOWN, Barbados (25 Feb. 2019) – In an effort to provide more opportunities for Caribbean nationals pursuing higher education and careers in the tourism industry, the Caribbean Tourism Organization (CTO) Scholarship Foundation has enhanced and expanded its programme.

With the support of partners in the private sector, the foundation is this year introducing scholarships of up to $5000 in public relations and communications; tourism education or human resources development; hotel, resort, or villa development, design and/or planning; and aviation or air transport technologies. In addition, the Arley Sobers Memorial Scholarship for those seeking to enhance their skills in tourism research or statistics is being doubled from US$2500 to $5000, while a master’s degree scholarship of no less than US$5,000 is being offered for studies in tourism-related disciplines, including language, agriculture, fisheries, horticulture, event management, interior design, medical tourism, architecture, sports, culture and heritage, environmental protection and preservation.

The foundation is also offering a US$5000 scholarship to Caribbean nationals interested in pursuing a first degree in tourism management or marketing, as well as study grants of US$2500 to those seeking to improve their skills in any tourism-related field of study that will enhance the development of a sustainable tourism industry and boost service excellence in the region.

“By expanding the programme to include financial support for study in this wide range of tourism-related subjects, the CTO Scholarship Foundation seeks to meet its objective of ensuring that the brightest and the best are attracted to careers in the tourism sector or in areas that impact tourism, thereby helping to build a Caribbean tourism industry that is globally competitive and sustainable,” says Jacqueline Johnson, the foundation’s chairman. “The foundation is profoundly thankful to our partners who have come on board to make these industry specific scholarships possible, and we look forward to welcoming other partners in the future.”

The full list of scholarships and grants, along with criteria for qualification, can be found at https://bit.ly/2JhVfO3. Applications are currently being accepted and the deadline for submitting entries is Friday, 19 April 2019 at 11:59 p.m. Pacific Time. All applications must be submitted online at https://bit.ly/2VeNQUX. Applications will not be accepted via mail, email or fax. The foundation selects individuals who demonstrate high levels of achievement and leadership both within and outside the classroom and who express a strong interest in making a positive contribution to Caribbean tourism.

Individuals who wish to make a contribution to the CTO Foundation can do so via its GoFundMe page at https://www.gofundme.com/cto-scholarship-foundation.

The CTO Foundation is a 501 (C)(3) entity established in 1997 with the aim of training and developing future leaders for the Caribbean tourism industry by funding studies in tourism and tourism-related subjects, hospitality and language. Since its inception, the foundation has raised over US$1 million in scholarship funds and has provided over 280 grants and scholarships.

Caribbean Tourism on the Upswing 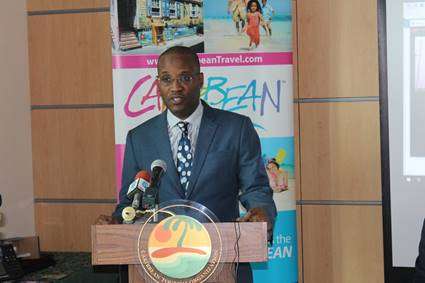 BRIDGETOWN, Barbados (13 Feb. 2019) – The Caribbean tourism sector is projected to record strong growth in 2019 on the heels of a stronger-than-expected performance last year.

The Caribbean Tourism Organization (CTO), the authority on regional tourism statistics and performance, is forecasting 6-7 per cent growth this year, continuing an upward trend which began last September.

“We are projecting that tourist arrivals will increase by between six and seven per cent in 2019, as the damaged infrastructure in the hurricane-impacted destinations returns to capacity. Similarly, cruise arrivals should expand by a further four per cent to five per cent,” Ryan Skeete the CTO’s acting director of research revealed at the Caribbean Tourism Performance Review news conference at the CTO’s headquarters this morning.

Skeete did caution of possible “significant headwinds to navigate”, including the outcome of the Brexit negotiations in the UK, the on-going trade war between the United States and China and potential extreme weather events in the destinations and marketplaces.

Still, he said, with global demand for international travel expected to remain strong, underpinned by healthy economic activity, and with improved air connectivity helping to boost arrivals, the outlook for Caribbean tourism in 2019 was cautiously optimistic.

The CTO research director revealed that a robust 9.8 per cent growth during the September to December period last year, led to a stronger-than-projected performance. It was a significant turnaround from the previous eight months of decline.

“Even the destinations that were severely impacted by the 2017 hurricanes, despite registering overall double-digit declines last year, experienced a significant turnaround during the last four months, registering triple-digit increases during this period,” Skeete told the briefing, which was streamed ‘live’ to an international audience.

The 29.9 million tourist visits in 2018 represented the second highest number of visitors to the Caribbean on record, surpassed only by the 30.6 million who visited in 2017. And while this represented a 2.3 per cent decline overall, it was better that the anticipated three per cent to four per cent fall-off.

“With a strong performance during the last four months of 2018, including a robust showing by countries impacted by the 2017 hurricanes, the evidence suggests that Caribbean tourism is on the upswing,” Skeete declared.

According to information compiled from CTO member countries, Canada was the strongest performing market – its 3.9 million visits represented a 5.7 per cent rise. The intra-Caribbean market had its best performance ever, reaching two million visitors, while South America produced 1.9 million tourist visits, representing a 3.6 per cent increase. Arrivals from Europe grew by a modest 1.3 per cent, with UK arrivals remaining flat at an estimated 1.3 million.

However, the United States, which remains the region’s leading market, was down, with the 13.9 million American tourist visits representing a 6.3 per cent fall. This was due mainly to steep declines in arrivals to popular destinations impacted by the hurricanes, such as Puerto Rico, which was down by 45.6 per cent, and St. Maarten, which fell by 79 per cent.

This notwithstanding, there was a healthy 28 per cent rise in arrivals from the US in the fourth quarter, reflecting the strong turnaround during this period.

BRIDGETOWN, Barbados (4 Feb. 2019) – The Caribbean Tourism Organization (CTO) has reiterated its strong support for the Global Tourism Resilience and Crisis Management Centre which was officially launched in Jamaica last week.

In a brief message endorsing the project led by Jamaica’s Minister of Tourism, Edmund Bartlett, the CTO Chairman Dominic Fedee stressed the challenges the Caribbean region faces in recovering from natural disasters and the lasting effects of such adversities. The resilience centre, he said, will play a hugely important role in helping the region to recover from such crises, and to thrive.

The centre, which is being housed at the University of the West Indies, Mona, is being designed to help vulnerable states across the world to recover quickly from natural disasters. It will specifically target destination preparedness, management and recovery from disruptions and/or crises that threaten economies and livelihoods globally, with real time data and effective communication.

In emphasizing the timeliness of the centre, the CTO chairman referred to a study by the World Bank which found that disasters impact gross domestic product in developing states at a rate 20 times higher than in industrialised nations, causing greater disruption and severe consequences for vulnerable members of society.

He said the Global Tourism Resilience and Crisis Management Centre would ensure that the region would continue to benefit from the economic, social, cultural, and historic value of tourism, which is its primary income earner.

“A lot has been said about the environmental challenges that hurricanes present but they are perhaps the single largest threats to our economies. The Caribbean Development Bank did a study years ago which showed that a large portion of the debt on the books of member countries is due to borrowing to rebuild infrastructure ravaged by storms and hurricanes.

“This has resulted in a high debt-to-GDP ratio in various member countries and consequently a serious constraint to growth. So our vulnerability to hurricanes and extreme weather conditions have a debilitating effect on natural disasters,” the CTO chairman stressed.

The quarter also represents a marginal increase of 0.9% over the same period in 2016. November 2018 was the first month to show an increase over the same month in 2016, with an increase of 15.6 % over November 2016. Arrivals amounted to 5,271 which is the highest arrivals for that month over the past 12 years of reported data, representing a record for the destination in that regard. December figures showed that the upswing continued, registering a 6.7 % increase over December 2016 arrivals.

The year-end figure of 62, 828 visitor arrivals, represents a 13% decline over 2017 figures of 72, 228. This performance surpassed the projections given for countries which had suffered a natural disaster of the magnitude of Hurricane Maria during the previous year, as expected declines are normally in the vicinity of 30%. In addition, the 2018 numbers represent only a 20% decline over 2016 arrivals which is also of significance.

The focus of DDA’s marketing and product development efforts for the past year was to provide current information on available product and communicate pertinent updates to all relevant publics.

Timely updates on the destination’s positive recovery efforts and stories of optimism were communicated to all relevant publics, internal and external to Dominica. Vicky Chandler, DDA’s Destination Marketing Manager indicates “We embarked on an aggressive communications strategy which saw the development of a separate website specific to destination updates; awareness and discount campaigns and a concerted effort in our Press outreach globally, hosting media from all of our main source markets and communicating outward via social, digital and print media to potential consumers as well as to our travel trade network.”

The cruise season was modified as a result of the passage of Hurricane Maria resulting in an 88% decline in arrivals in the first 6 months of 2018 vs same period in 2017.   However, there was a major improvement in cruise arrivals during the last two (2) months of the year.  The destination also recorded Cruise visitor arrivals in July, August, & September for the first time in 5 years which contributed to a total of 134,469 arrivals in 2018, a 14.4%  decline over 2017 (154,040).”

Minister for Tourism and Culture, Hon. Robert Tonge opines, “These figures are the direct result of the cumulative efforts of Team Dominica in many different aspects of the destination’s recovery. The government’s investment in site rehabilitation and enhancements along with the celebratory season which started with the exciting WCMF in October, through to Reunion and the 40th Anniversary of Independence in November were key drivers of interest among our loyal Diaspora market and friends of Dominica. The recorded figures augur well for the future of the industry and the people of Dominica on the whole.”