JOHN’S, Antigua (7 Oct. 2019) -The representative of the Turks & Caicos Islands emerged the winner of the Caribbean Tourism Organization (CTO) Tourism Youth Congress held in the Antigua and Barbuda parliament building on Friday 4 October.

Fifteen-year-old Helena Jones Robinson High student Danae Dennie was among 14 ‘junior ministers of tourism’ from CTO member countries who exchanged thought-provoking and spirited presentations on topics related to the future of the industry. 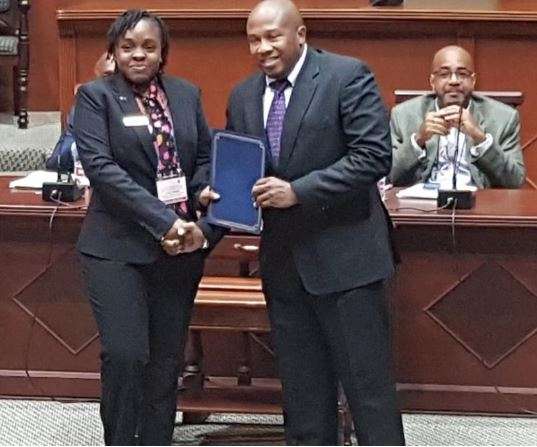 Dennie presented a compelling presentation and offered suggestions to enhance the national tourism product of the Turks & Caicos Islands through a national tourism service programme, a visitor satisfaction review app dubbed “My Absolute Truth”, and a STAR awards programme.

The junior ministers each spoke on one of the topics of: ‘Towards Smart Travel Experiences Within The Caribbean Region”, “Equipping Our Youth To Thrive In A Changing Tourism Environment”, and “Making Excellence A Habit In Caribbean Tourism”. The youth delegates were also each given a ‘mystery’ topic on which to speak.

In second place was Hailey Mahy, 15, of the Ursuline Convent School in Barbados, while Tobago’s Kayleigh Lewis, 16, of Scarborough Secondary placed third.

The other junior ministers and commissioners of tourism who took part were: Jody-Ann Parker, 15, of Antigua & Barbuda; Akeya Herbert, 17, of the British Virgin Islands; Leanna Allen of the Cayman Islands; Jenna Thomas, 16, of Jamaica, Meïssane Carpin, 15, of Martinique; Brianne Chapman, 14, of Nevis; Anastasia Korstanje, 16, of St. Eustatius; Aneeda Hardat, 14, of St. Martin and Kenisha Castello, 15, of St. Vincent & the Grenadines.

The youth congress, which simulates a CTO council of ministers and commissions meeting, was chaired by the last year’s winner, Bryanna Hylton, 18, of Jamaica. It brought to an end two days of activities by the CTO – including business meetings and a Caribbean tourism sector outlook forum – held in collaboration with the Antigua and Barbuda Tourism Authority and the ministry of tourism.