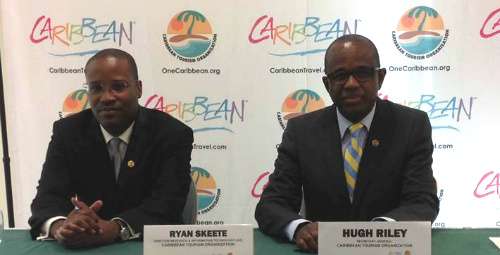 BRIDGETOWN, Barbados (16 Feb. 2016) – For the first time ever since the Caribbean Tourism Organization (CTO) began keeping records, the Caribbean outperformed every major tourism region in the world in setting new arrival and spend records in 2015 while exceeding expectations.

International tourist trips to the region grew by seven per cent to 28.7 million visits, much higher than the projected four to five per cent growth. Visitors spent an estimated $30 billion, a 4.2 per cent rise over the $28.8 billion spent in 2014.

“So 2015 was the second year in a row that the region has done better than the rest of the world, and the sixth consecutive year of growth for the Caribbean,” the CTO’s secretary general Hugh Riley revealed today in announcing  the record performance at a news conference at CTO headquarters, streamed live to a global audience that spanned the Caribbean, the Americas, Europe and as far as Asia.

Mr. Riley attributed the growth to improved global economic conditions in the marketplace; a boost in consumer confidence, particularly in the United States; falling oil prices; rising seat capacity and persistent marketing by CTO member countries and their partners.

The CTO reported growth in all the major markets – the United States, Canada, Europe, the Caribbean and South America – with the intra-regional market performing better than it has ever done before.

“Despite concerns about the cost of travel within the region, the intra-Caribbean travel recorded its best performance since we started keeping records. In 2015, traffic from the Caribbean market accounted for six per cent of total arrivals into the region, with 1.7 million visits among the various states, an increase of 11.4 per cent over the previous year,” the CTO secretary general said.

The US, which remains the Caribbean’s primary market, accounting for about 50 per cent of arrivals, grew an impressive 6.3 per cent to 14.3 million visits.

Of the 5.2 million European visited, 1.1 million came from the United Kingdom, which recorded a 10.4 per cent rise.

“The European market made significant gains in 2015, with its best performance in seven years. For the first time since 2008, total arrivals from Europe reached the five million mark, a rise of 4.2 per cent compared to 2014. The UK was one of the dominant performers, growing by a healthy 10.4 per cent to 1.1 million visitors. Arrivals from Germany recorded an even better 11.5 per cent rise, while France was relatively flat, increasing by 0.8 per cent.

“Needless to say, we are very pleased with the Caribbean’s performance of stayover arrivals in 2015.  In each Quarter the region recorded at least six per cent growth over the corresponding quarter for 2014; and each month in 2015 was better than the same month the previous year.

“Still, the Caribbean cannot be complacent.  We must continue to grow our traditional markets, strengthen emerging ones and penetrate new sources as we target the 30 million arrivals mark we set some years ago.  Our efforts to improve our product quality, enhance our marketing, grow our rate base, increase our profitability, and constantly offer excellent value for money, must continue,” Mr. Riley advised.

The CTO secretary general also announced growth in the cruise sector, although at a slower rate of 1.3 per cent, with 24.4 million cruises in Caribbean waters.

He said the outlook for 2016 was positive with tourist arrivals expected to increase by 4.5 to 5.5 per cent, while cruise is estimated to record one to two per cent growth, as summer redeployment of ships continues.