10th March 2020 A delegation of extraordinary Grenadians joined Jennifer Hosten and the stellar cast of MISBEHAVIOUR (12A; UK release 13th March) at its world premiere in London on Monday evening, as Pure Grenada, the Spice of the Caribbean heralded the movie for its portrayal of a defining moment in history: the crowning of the first woman of colour as Miss World.

Patricia Maher said: “Misbehaviour depicts a chapter of Jennifer’s story that exemplifies her ground breaking life as she helped put Grenada on the map fifty years ago. Since then Grenada has grown its international appeal for visitors with a record breaking half a million visitors to the destination in 2018.”

Hosten, born in Grenada in 1947, was a flight attendant for BWIA (now Caribbean Airlines) when she took a leave of absence to compete in Miss World. The beauty competition was the most-watched TV show on the planet and in 1970 was hosted by US comedy legend, Bob Hope. The stakes could not have been higher and when the live broadcast was interrupted by a Women’s Liberation Movement stage invasion, the global audience was captivated. Then, as Miss Grenada – the self-styled Nutmeg Princess – was crowned the first woman of colour Miss World, conventions crumbled.

Subsequent to the competition, Hosten pursued a successful career in diplomacy, trade negotiation and international development including serving as Grenada High Commissioner to Canada, working as a Canadian diplomat to Bangladesh and owning her own tourism business.

Maher added: “The tri-island destination of Grenada, Carriacou and Petite Martinique offers something for everyone with a very warm welcome for visitors and we’re delighted that this retelling of Jennifer’s inspiring and relevant story once again gives Grenada top billing.”

MISBEHAVIOUR is in UK cinemas from Friday, 13th March 2002. 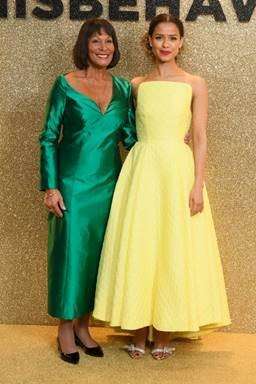 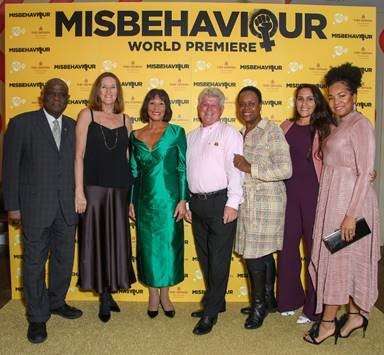 Montserrat’s St Patrick’s Festival is getting the full Hollywood treatment this year, with the Premiere screening of the major new film, Wendy, on 15th March 2020. The free broadcast, which will be hosted by the Oscar-nominated director Benh Zeitlin, will take place at 6.45pm at the Cultural Centre in Little Bay. A second screening of the film will take place Monday 16th March at 6.45pm at the Basketball Court in Little Bay.

The classic story of Peter Pan is wildly reimagined in this ragtag epic from Benh Zeitlin, director of BEASTS OF THE SOUTHERN WILD. Lost on a mysterious island where aging and time have come unglued, Wendy must fight to save her family, her freedom, and the joyous spirit of youth from the deadly peril of growing up.

This long-awaited cinematic creation was written and filmed on Montserrat, with a number of familiar faces gracing the screen in the final cut.

Martin Parlett, Head of the Government’s Programme Management Office, has been working with the team from Searchlight Pictures, a subsidiary of the Walt Disney Corporation, to bring the film to this year’s celebration – alongside the Tourism Department and the Montserrat Arts Council.

Parlett said, “As soon as the release date for the film was made public last year, we reached out to Benh and the team to begin planning the Montserrat Premiere. They were totally energized by the prospect of bringing the film to this year’s St Patrick’s Festival and I know I speak for the whole island when I say that we cannot wait to see the final creation come home. The energy and commitment of the Wendy crew to Montserrat is palpable, and this film is proof positive that Montserrat can inspire, develop and contribute to the highest standard of projects within the international creative industry. Congratulations to everyone involved”

The Cultural Centre will be transformed for the evening into a red carpet affair, with the opportunity to be photographed alongside members of the film crew and Peter Pan actor, Yashua Mack.

Benh Zeitlin said, “The Montserrat screening is the moment the whole Wendy family has been waiting for since we began this project in 2013 – it is where the magic of this film began.  The film was written on-island and inspired by the breathtaking landscapes and the courageous people that generously welcomed us into their beautiful home.  The people of Montserrat were the heart and soul of our international Wendy family and we cannot wait to share it with everyone who made this production possible. Montserrat isn’t just a backdrop; it is the essence of this story’s adventure. We hope the film will make our beloved island proud. The team is beyond excited to get as many people to the screenings as possible, and to have the opportunity to raise a bush-rum and say thank you to everyone who touched our lives and made Wendy possible.”

A smaller screening of “The Making of Wendy” will be taking place at 3pm on Monday 16th March, upstairs Cultural Centre.

Wendy is a 2020 American fantasy drama film directed by Benh Zeitlin, from a screenplay by Zeitlin and Eliza Zeitlin. The film stars Devin France, Yashua Mack, Gage Naquin, Gavin Naquin, Ahmad Cage, Krzysztof Meyn, and Romyri Ross. It is intended to be a re-imagining of J. M. Barrie’s Peter Pan.

Wendy had its world premiere at the Sundance Film Festival on January 26, 2020 and was released on February 28, 2020 by Searchlight Pictures.

Searchlight Pictures (formerly Fox Searchlight Pictures) is an American film studio that is a subsidiary of The Walt Disney Studios, a division of The Walt Disney Company. It is a sister studio of the larger film studio 20th Century Studios. Searchlight specializes in the production and distribution of independent North American and European films alongside comedy-drama, horror, art-house, and foreign films, all of which the studio sometimes finances.

Searchlight’s Slumdog Millionaire, 12 Years a Slave, Birdman, and The Shape of Water have all won the Academy Award for Best Picture at the 81st, 86th, 87th, and 90th Academy Awards respectively, as well as a further 15 Academy Awards combined.

Montserrat is a British Overseas Territory and is the only island in the Caribbean boasting an active volcano: The spectacular Soufriere Hills Volcano. Located in the Eastern Caribbean with a total area of just 39 ½ square miles, this lush green mountainous island possesses an amazing network of hiking trails and dark-sand beaches and exudes a natural beauty and charm that disarm the “been-there, done that” traveller. Fondly known as the Emerald Isle of the Caribbean for its resemblance to the coast of Ireland and also the Irish ancestry of many of its inhabitants, Montserrat is the only country outside of Ireland to celebrate St Patrick’s Day as a national holiday. For more information on how you can enjoy a vacation on this stunningly beautiful island, visit www.visitmontserrat.com.

Basseterre, St. Kitts (March 5, 2020) – To date, there have been no confirmed cases of COVID-19 in St. Kitts & Nevis. However, in response to the COVID-19 global outbreak and the subsequent international spread of the disease, the destination has strengthened surveillance and pre-emptive healthcare procedures at its air and seaports as well as throughout the Federation. The health system has moved to detect, contain and manage the situation in the event the virus reaches the Federation.

• At St. Kitts’ Robert L. Bradshaw International Airport, all incoming air passengers to the Federation must at all times complete question #17 of the Customs/Immigration Form, which requires a listing of “countries visited during last six weeks.”
• At the cruise port, inspectors from the Environmental Health Department board each vessel that docks to review the passenger travel manifest and all medical reports for any passengers exhibiting flu-like symptoms. Any passenger displaying such symptoms is not permitted to disembark.
• Any and all incoming passengers who have traveled to or from any of the following countries within the last 14 days will be asked to provide travel history, history of exposure to the virus and contact information: China, Hong Kong, Singapore, South Korea, Italy, Japan and Iran.
• Persons traveling to/from these destinations within the last 14 days are asked not to travel to St. Kitts & Nevis. Persons who do travel to St. Kitts & Nevis from these destinations will be subject to screening at the ports of entry and may be monitored by the public health team or quarantined at home or at a designated facility based on risk assessment.
• The Federation of St. Kitts & Nevis reserves the right to deny entry to any non-Nationals who have visited the countries listed above within the incubation period of 14 days. Nationals and/or residents who have visited those countries within the 14-day incubation period will be required to go through the established screening process.
St. Kitts & Nevis is complying with International Health Regulations and reporting to the Caribbean Public Health Agency (CARPHA) and the Pan American Health Organization (PAHO) / the World Health Organization (WHO) as appropriate. Following the WHO’s declaration on January 30th, 2020 that the outbreak of the Coronavirus constitutes a Public Health Emergency of International Concern, the Government of St. Kitts and Nevis advises citizens and residents to restrict travel to the aforementioned destinations until the WHO gives the all clear in relation to the COVID-19.

The Ministry of Health is working closely with the National Emergency Management Agency (NEMA) and all appropriate government agencies to execute national disaster preparedness and response plans so as to prevent, monitor and manage the spread of the virus if and when a national or visitor tests positive for the virus . The Disaster Mitigation Council is in place to handle the response to the disease and the Ministry of Health has conducted training exercises with frontline workers including police and immigrations and customs officers.

A destination-wide awareness and education campaign is being implemented within schools, the workplace and communities to remind the public of everyday preventative actions such as including basic hygiene best practices to help stem the spread of the virus. These include frequent handwashing with soap and water or 60% alcohol-based hand sanitizers, frequent disinfection of surfaces and avoiding close contact with people who exhibit signs of respiratory illness.

International markets showed strong signs of improvement with the highest growth noted from the Canadian market followed by Europe and Latin America.

“The continued marketing efforts by the Department of Tourism under the direction of my Ministry continue to show strong signs of growth in this new decade. My tourism teams are dedicated to providing tangible benefits through tourism driven economic activity for our islands and our people,” commented the Minister of Tourism, the Hon Moses Kirkconnell.

Response to Confirmed Cases of COVID-19 on French Saint Martin

The Prime Minister Hon. Silveria Jacobs on Sunday morning activated the Emergency Operations Center (EOC) in connection with two confirmed cases of the coronavirus COVID-19 on French Saint Martin.  These persons are currently in isolation at the Hospital on the French side and will remain there for 14-days according to the Prefecture.