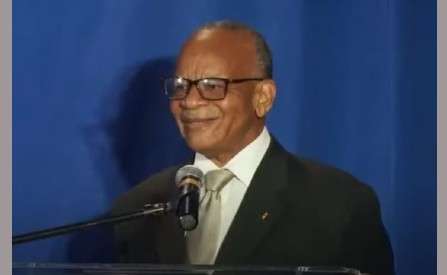 The Caribbean Tourism Organization joins the rest of the Caribbean in mourning the loss of Dr. Jean Holder, the father of regional tourism development. The late Dr. Holder spent more than 30 years of his professional life leading the development and expansion of the sector that would become the region’s main foreign exchange earner and the engine of economic growth.

You are welcome to add your tribute to Dr. Jean Holder below.

Cathy McDonald from Atlanta wrote on March 27, 2022 at 5:29 pm
My sincere condolences to the family of Dr.Jean Holder. I will never forget his friendship and mentoring while serving on the Executive Board of CTO representing the Chapters. He was a true and dedicated leader and pioneer in the Tourism Industry. May he Rest In Peace.

Calvin.S Niles from Barbados wrote on February 7, 2022 at 10:47 pm
Calvin and Leonora Niles along with other family members extend sincerest condolences to the family of Dr. Jean Stuart Holder former Secretary General of the CTO .Dr Jean Steuart Holder was the pioneer of the fledgling organisation the CTRC which he fashioned and forged some forty years ago with skill and almost monkish dedication, vision and purpose he was able to create for the region a tourism product that is impressive, world class, acceptable to all. Dr Holder has left us a legacy a product and also an institution of which we can be proud.
May he rest in peace.

The Ministry of Tourism, Saint Lucia Tourism Authority, and by extension the Government and people of Saint Lucia, join the rest of the Caribbean tourism industry in mourning the loss of Dr. Jean Holder.

Dr. Holder was very familiar to many in the tourism industry in Saint Lucia and worked closely with several of our tourism partners and Ministers over the years, including Hon. Prime Minister- Phillip J. Pierre, when he served Saint Lucia as a Minister for Tourism.

On behalf of the Government and people of Saint Lucia, we extend heartfelt condolences to the Holder family and the extended regional tourism family. At every stage of his tourism career, he served selflessly and will always be remembered for his warmth, friendly personality, and passion for the development of the regional tourism product.

Losing a pioneer and visionary of great integrity and leadership as Dr. Holder leaves an almost unfillable void. We extend heartfelt condolences to his children and extended family.

May he forever rest in peace.

Carrole Guntley wrote on January 31, 2022 at 6:32 am
I was extremely saddened to hear of the passing of my dear colleague and beloved friend Jean Holder. Jean was a major architect of Caribbean tourism and always sought to find innovative ways to improve the tourism product, not only in his native Barbados, but for the entire Caribbean Region.

A giant has fallen, but he will rise again to eternal grace among the angels.

KINGSTON, Jamaica; January 27, 2022: Jamaica's Minister of Tourism, Hon. Edmund Bartlett, has offered condolences to the family of Dr. Jean Holder, who was regarded by many in the Caribbean as the "father of regional tourism development."

"Jamaica is proud to have had an association with this great Caribbean man from Barbados, and we are all in his debt. On behalf of the Government of Jamaica, we offer our condolences to his daughters and the many other key partners, stakeholders and extended family that have embraced and encircled him during his lifetime. May his soul rest in peace," said Bartlett.

Born in Barbados, Dr. Jean Holder spent more than three decades of his professional life developing and enhancing the tourism industry, which has now become the primary source of foreign exchange and economic growth in the region.

Holder, who represented his country for 14 years, was widely known as the face of the Caribbean Tourism Organization (CTO) for three decades. By the end of his tenure, the CTO became the region's largest tourism marketing and development organization, with 34 Caribbean states and several national, regional, and international private sector travel and tourism organizations and firms as members.

"Dr. Jean Holder is indeed an iconic Caribbean man who has transcended the region into the global space. He has served tourism as a real giant, and we are all the better for it. On his shoulders, so many of the leading Caribbean entrepreneurs, administrators, planners, thinkers, and even ministers have stood as we chart a path to make the Caribbean one of the leading destinations in the world. We mourn his passing, but we glory in his legacy, " said the Minister.

Along with his career in tourism and the Foreign Service, Holder made substantial contributions to Barbados' cultural development. He was the founding chair of the National Independence Festival of Creative Arts (NIFCA), which he co-founded in 1973 with other prominent Barbadian artists.

The death of Dr. Jean S. Holder leaves a void in the travel and tourism industry that will never be filled. While many are aware of Dr. Holder’s contribution to regional tourism as a tireless Chairman of LIAT in recent years, it is important to note that the region’s debt to this scholar, educator, diplomat, author, industry leader, consummate tourism practitioner, and national awardee, dates back more than half a century.

It was in his role as a tourism leader that I knew him best.

As the executive director of the Caribbean Tourism Research and Development Centre (CTRC) from its inception in 1974, Jean Holder was one of the earliest and strongest proponents of the collection and analysis of regional tourism statistics as a tool for informed decision making throughout the industry in the Caribbean. He made the CTRC the repository of authentic tourism data, as he assembled teams of researchers and statisticians from across the region and beyond. In 1989 he led the CTRC into a merger with the New York based Caribbean Tourism Association to form the Caribbean Tourism Organization (CTO), headquartered in Barbados, with offices in New York and London. Jean became the CTO’s first ever Secretary General, a position which he held for fifteen years and from which he piloted the CTO into becoming the region’s tourism development entity, representing Dutch, English, French and Spanish speaking Caribbean states and territories.

Jean had an amazing capacity for tackling and overcoming challenges. His ability to place the Caribbean prominently on the global stage as a leading tourism destination was legendary, as was his skill at forging alliances with all sectors of the travel and tourism industry in Barbados and overseas.

He was a master at diplomacy. His well-reasoned arguments were delivered with authority and with sensitivity molded from years of foreign service experience. His quick wit and disarming sense of humour helped to defuse many delicate situations in regional negotiations throughout the years.

Jean Holder made an indelible mark on Caribbean tourism. He will forever be remembered for his tutelage and nurturing of industry professionals, his creation of many of the systems and principles upon which the industry stands, and his skillful leadership in what is clearly one of the world’s most competitive industries. He never lost sight of tourism’s primary role as a tool of economic development. He was generous with his time, unselfishly sharing his knowledge and his considerable intellect.

I will forever be indebted to Jean Holder. To his daughters and his entire family, I express my deep condolences on the passing of this truly accomplished Barbadian. May he rest in peace.

Bonita, Paul, Jonathan, Maya and Ayanna Morgan wrote on January 28, 2022 at 2:17 pm
Sincere condolences to all of the family and we pray Dr. Holder will rest in peace!